Coastal and island communities in the Philippines have very high exposure to climate and disaster risks. Isolation, combined with limited access and communication systems, compounds the situation. Through accessing Funds from Cordaid’s private donor base in the Netherlands, Cordaid Philippines has been able to invest in capacity building in vulnerable communities. They have empowered local actors and community members, and in turn, influenced government stakeholders.

From traditional weaving, women in North Palawan are now able to make many more products to be sold in a nearby town. Photo: Juan Miguel Torres

Dependence on fishing, both for food and income, is the norm in the islands of North Palawan. But unpredictable weather patterns mean there are many days when they are unable to go to sea. In addition, over-exploitation of the seas and forests further decreases food and water resources and this results in more poverty and malnutrition.

The Tagbanwa tribe is one of the oldest ethnic groups in the Philippines and pandan weaving is the most important traditional Tagbanwa craft. Cordaid collaborated with local government stakeholders (Department of Trade and Industry, Department of Social Welfare and Development, National Commission for Indigenous Peoples and Coron Local Government Unit) to strengthen these indigenous communities and develop their weaving as a sustainable ecosystem-based enterprise.

Mylene Latube is a native Tagbanwa weaver in Barangay Malawig, Coron Palawan. At a very young age, she mastered the skill of mat weaving, as she needed to help her mother make pandan mats to support the needs of their family.

The weaving initiatives and the newly formed weavers’ association have helped Mylene and other women in the villages. They can exchange their skills of producing various handicrafts and improve quality and profitability. Mylene is now one of the most productive members of Sékéd Pandan Weavers Association.

“When I got family on my own, I could barely make enough money for the education of my children”, says Mylene. “Today, my improved weaving skills already helped me to send my children to school and fulfill their dream.”

Weavers protect and replant the pandan plants they use as the raw materials for their products. Pandan naturally grows in coastal areas. Reforestation and making sure pandan plants are prospering means that these beach plants can securely hold the sand and soil along the coast. This protects the beach from erosion and limits waves from traveling too high up to the beach to the areas in which people live.

Mylene and other women weavers have started to establish common planting areas aside from their individual plantations. The weavers’ group has also developed a resilient and sustainable production plan, based on a climate risk assessment for all stages of the production chain.

Sékéd is their brand name. This is a Tagbanwa term for ‘tying or linking’. It represents the role of indigenous women weavers in demonstrating the importance of sustainable pandan handicraft production to protect the ancestral land. Promotion, sales, and demand are so high for the products, new women are encouraged to join the groups. Currently, 120 women are supporting Sékéd production in Tara, Buenavista, and Malawig and in June 2018, the weavers participated in a Trade Promotion Fair in one of the biggest malls in the country.

More pictures of the program: 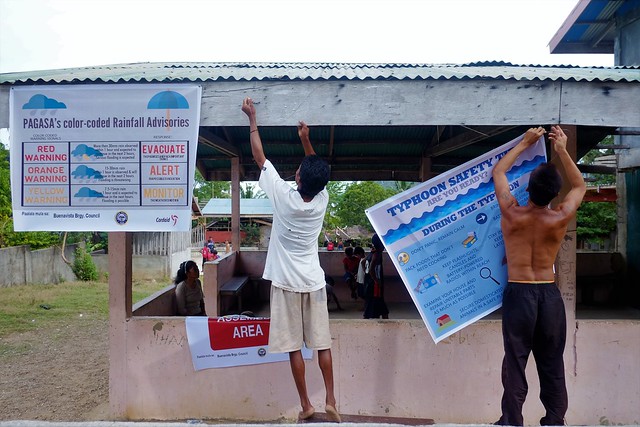 Fighting food insecurity in South Sudan with access to finance